The Drop Off – Novel 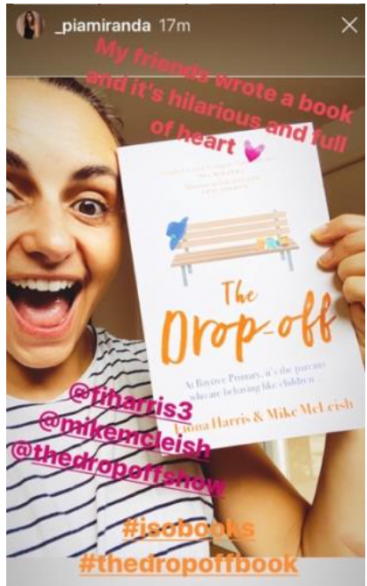 “This book by Melbourne authors and married couple, Fiona Harris and Mike McLeish, is a cross between Kitty Flanagan and Liane Moriarty. The Drop-off will make you laugh and cry while reminding us all of the redemptive power of friendship, community, forgiveness … and good coffee!” – Herald Sun

Husband and wife writing team, Fiona Harris (SkitHouse, Tangle, The Beautiful Lie) and Mike McLeish (Utopia, Mustangs FC, Keating the Musical) have based The Drop-off on their award-winning, critically acclaimed web series of the same name. The series (‘Brutally honest and beautifully made,’ Tom Gleeson) has won a dozen international ‘Best Web Series’ awards and been officially selected for over twenty other festivals worldwide. Channel 9 has acquired the series and will screen it as a telemovie in 2021.

In The Drop-off, Lizzie, Megan and Sam don’t play by the rules. Lizzie is a part-time midwife with four kids and a secret past. Sam is a stay-at-home dad whose marriage is on the brink. Megan is a former model with a son, a thriving business and no time for loneliness.

None of them are very interested in the world of school concerts and working bees, until their lollipop man drops dead and everything changes…

The Drop Off  is available now from all of the usual nooks and crannies.